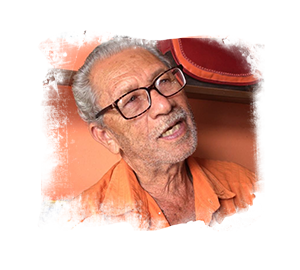 It is no wonder that Espedito Velozo de Carvalho is known as Espedito Seleiro (saddler). The leather handicraft for which he is now famous has been in the family’s blood for generations, first with his great-grandfather, then with Gonçalves Seleiro, his grandfather, and, lastly, Raimundo Seleiro, his father, the principal teacher, and for decades one of the state’s most renowned artisans. Despite being today a name known in national fashion circles, with works in partnership with brands like Cavallera and parades in São Paulo’s Fashion Week, the name Seleiro gained fame initially with his father, much because of the following history.

In the 1930s, Raimundo had already good experience in working with leather, manufacturing saddles, belts, and clothing worn by cowboys in the region of Nova Olinda, in the Cariri region, Ceará. One day, a gentleman appeared in his shop with a peculiar order: leather sandals with a square sole. Even though he had no experience in shoemaking, Raimundo eventually accepted the order, and a few days later, when the same gentleman returned to fetch the products, the craftsman discovered the truth. He had produced a request made by Lampiao himself, and now it was adorning the feet not only of the famous cangaceiro, but also of Maria Bonita and rest of his group as well. His reputation of a good craftsman gained after the illustrious order grew up in Ceará, encouraging Raimundo to create a series of other products.

Over the years, in addition to carrying on his father’s legacy, Espedito Seleiro has developed himself as one of the greatest masters of leather crafts in the country. In his workshop, also located in Nova Olinda, employs today 22 artisans, among his sons, sons-in-law, daughters-in-law and nephews. They make shoes, bags of various sizes, straps, cowboy hats and other products, all in hand-sewn leather. The colorful patterns, one of the hallmarks of his work, were inspired by the garments of the gypsies who passed through the region. They give the products a look both traditional and very modern. In 2014, Espedito (today 78 years old) created in his city the Leather Museum, with the intention of keeping alive the legacy of his work and that of his ancestors.