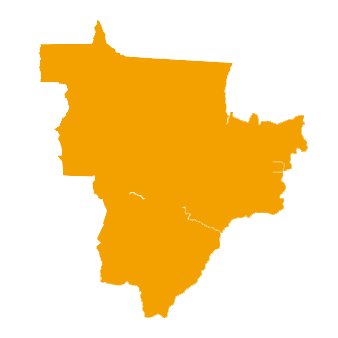 In the north of Mato Grosso, part of the state closest to the state of Pará – and therefore covered by the Amazon forest – the predominant culture is the indigenous one, mainly represented by the tribes of the so-called Upper Xingu area. There you can find iconic works of the region, such as the wooden benches in the form of local animals carved by the meynakos and also the jewels of miçanga made by the kayapó tribes. However, the major local highlight is the ceramic pieces created by the waurás. Joining elaborated zoomorphic forms with traditional graphics, painted with jenipapo and urucum, these works are considered the most sophisticated within the region.

Located below Mato Grosso, the state of Mato Grasso do Sul concentrates the largest soybean and livestock farms in the country. Huge farms join vast areas of cerrado, making up most of the state’s landscape. Scattered along small reserves surviving among those large private land areas, the terena tribes keep alive their culture of working with clay, creating vases, pots and other utensils painted in a very lively red color and minimalist designs. Another important indigenous ceramist culture of the state is the one maintained by the kadiwéus, whose extremely colorful works reflect their own body’s painting patterns.

Besides the terena and the kadiwéus, another tribe in Mato Grosso do Sul, famous for its artisanal work, is that of the ofayé, in the village of Anodi, near the east of the state. Working mainly with prints, their handmade fabrics and unique designs, representing the local fauna and flora, are now famous in other regions of the country.

With the exception of the Federal District, the largest city in the state and the capital of Brazil, Goiás is formed by small towns scattered in extensive areas of cerrado. Unlike the other two states of the region, crafts are more closely linked to white culture than to indigenous ones. Among its most representative productions are textiles finely embroidered by the artisans of the Embroiderers Association of Tabatinga (a city near the capital), and the works made from corn and banana straw created by Fatinha Bastos, representing religious figures, peasants, dancers, flowers and other figures.