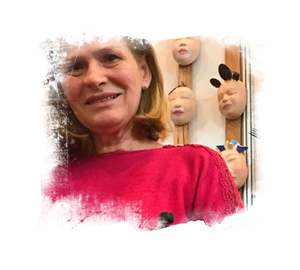 The story of the artist Nenê Cavalcanti is one of those happy examples of rediscovery that life sometimes offers us. Born in 1948 in a family of poor farmers in the city of Alagoa Nova, in the interior of Paraíba, Maria das Neves Cavalcanti Moreira discovered early on that the backwoods both poses difficulties but also may offer opportunities. And, for her, one of those opportunities was clay.

Life in Alagoa Nova in the 1950s, especially in a family of fifteen children, made it impossible for her parents to buy toys for all their children. So the solution was to learn to play with what nature had to offer. With the help of her sisters, Nenê gradually learned to work the clay to make the toys and other objects she wanted or needed in the house.

Many years later, already living in the capital, Nenê first worked during some time as a nurse, to then change profession and become a pedagogue. Working with exceptional children in the 1980s, she felt she needed more resources in order to interact with them. She then decided to take a course in plastic arts and it was then that the work with clay in her childhood began to return to the future artist’s life. Gradually, Nenê became involved with the idea of artistic production and, when she realized, she had already changed her profession once more.

With many years passed since her childhood, after changes of course and rediscoveries, Nenê Cavalcanti finally established herself as a potter and teacher of fine arts. Her feminine figures, angels, masks, naked and fat bodies and abstract pieces made of ceramics and recycled metals, all extremely delicate, have already won her several awards, and are now considered an aesthetic reference of the state of Paraíba.