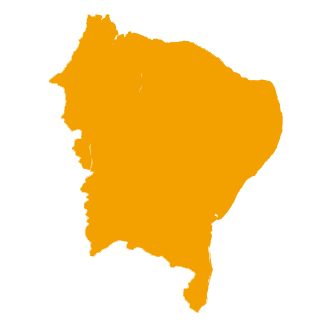 Place where the first Portuguese explorers arrived in the late fifteenth century, the Northeast region was also later the main point of entry for most of the black slave ships coming from Africa brought to the country. This mixture of black and white, tempered by the indigenous traditions of each region and the strong presence of Catholicism, has created a great diversity of cultural expressions in the region, which is reflected in the multiple options of craftwork that each state offers.

Currently, 56.5 million people live in the northeastern region of Brazil, distributed among its nine states: Alagoas, Bahia, Ceará, Maranhão, Paraíba, Piauí, Pernambuco, Rio Grande do Norte and Sergipe. Among these, the ones which stand out most for their craftwork are:

Place of arrival of the first Portuguese in 1500, Bahia is considered the birthplace of what would become Brazil in the future. Land of candomblé (religion brought by the African slaves) and their orixás, of the capoeira and the rhythmic music of the drums, this is the Brazilian state in which the black culture is more present. This influence – so explicit in the work of some of its famous children, such as Jorge Amado, Caetano Veloso and Gilberto Gil – is also evident in the production of artisans such as Noemia Gomez, who produces orixás from reused coffee filters, and Carolina Leão, whose saints, orixás and animals created in papier maché and papietagem are known for their delicacy and coloring.

However, although very influential, the negro was not the only one to mark the Bahian handicrafts. Over the centuries, many other expressions considered today as typically Bahian have been gaining form. Some examples of this are the colorful traditional crocheted from the Raso district used for lining of cushions, the braids and embroidery made with piaçava straw (of indigenous tradition) and the wooden birds of Santa Brígida.

First place of exploitation of the brazilwood, tree of whose resin was extracted a red dye for fabrics which was very much appreciated in Europe and that would later give name to the country, the crafts of Pernambuco has a strong connection with the use of wood, as it is the example of the dolls created by Mestre Heleno, in the city of Tracunhaém, the skeletal figures of Marcos de Sertânia, inspired by the characters of Graciliano Ramos’ book Vidas Secas, and the animal-shaped benches made by the artisans of Petrolina.

However, despite this relationship with wood, perhaps the material most associated with Pernambuco’s handicraft is clay. Deeply connected with the city of Caruaru and to the figurative work created by Mestre Vitalino (1909-1963) – considered one of the most influential Brazilian craftsmen – the work with clay continues to be a strong art expression in the state. Mestre Gaudino (known as “backland’s surrealist”), Zé Caboclo, Luiz Antonio and Manoel Eudócio (1931-2016), Mestre Vitalino’s last disciple, are some names which helped to carry on this local tradition.

Despite the presence of wood and clay, one can not speak of craftwork in Pernambuco without the name of J. Borges being cited. An artist born in the city of Bezerros (also famous for the Papangus masks of its Carnival), Borges began working with wood engraving initially to illustrate cordel stories. However, this work gradually gained national fame, leading him in 2002 to be one of the thirteen artists chosen by the UN to illustrate its annual calendar.

Son of a craftsman who worked with leather, Espedito Celeiro worked since childhood with his father in the creation of sandals, bags and other products decorated with patterns inspired by the gypsies that passed through the region and that today constitute an aesthetic deeply associated to the clothing of the northeastern backlands. On the other hand, the work developed by Mestre Noza (1897-1983) helped to consolidate another aspect that today is highly linked to Ceará: the deep religious feeling of its people.

Since his adolescence, Mestre Noza has lived with his family in Juazeiro do Norte, a northeastern city famous for its strong religiosity, influenced by Padre Cícero’s social work in the Cariri region. The artist began to create a work of carving in wood in the early twentieth century when carving saints and other figures of this imaginary that are today emblematic of the local culture. In the year of his death, the Mestre Noza Association was created, where today artists like Cícero Ferreira and Francisco Graciano (son of also famous Manoel Graciano) work.

One of the most well-known expressions of the crafts of the small state of Alagoas is the so-called filé. Strongly linked to the coastal region, passed from generation to generation, filé (fillet) is an embroidery technique with French origin which was appropriated by the fishing women of the northeast coast of Brazil in the 18th century, when fishing nets were used as support. With very complex patterns, Alagoas’ filé gained today its geographical indication identification due to the importance of its connection with this region.

Besides filé, from Alagoas is worth mentioning the Penedo embroidery, the human figures work made by Ilha do Ferro artists and, mainly, the potters of Capela, represented in the Loja Paiol by the work of Nena Capela, disciple of João das Alagoas, famous ceramist who received in 2011 the title of Living Heritage of the State.

Birthplace of important names of Brazilian culture, such as Augusto dos Anjos, José Américo de Almeida, José Lins do Rêgo, Assis Chateaubriand, Ariano Suassuna and Celso Furtado, Paraíba has a rich cultural history. As well as in the other states of the Northeast region, the Paraíba handicraft is divided between the representation of figures of the local fauna and the Brazilian Catholic religious imagination.

Among the works of artists from Paraiba brought by Loja Paiol are the colorful clowns made of papier maché created by Babá Santana, wooden sculptures representing birds and other animals created by Mestre Bento Sumé, and the famous pottery of Nene Cavalcanti. Born in a poor family in Alagoa Nova, in the interior of the state, Cavalcanti learned from an early age to work the clay to make not only pans and other household utensils, but also to make her own toys. Famous for its terracotta pieces representing angels, saints, women and other sometimes abstract figures, the work created by the artist is considered an aesthetic reference of Paraíba.

The Northeastern state with the smallest coast, the main cultural expressions of Piauí are more concentrated in its vast interior. As is common in many places in the Northeast, the difficulties of life created by semi-arid geography, together with a whole Catholic imaginary, inspire themes such as wood carved saints, angels and biblical scenes such as Adam and Eve in Paradise created by Mestre Expedito, and the so-called Santeiros de Teresina, which continues to be a very influential work for the new generations of local sculptors.

Besides that production, Piauí has another attraction that has fascinated scientists and artists for decades: the Serra da Capivara National Park, created in 1979 by researcher Niéde Guidon. The most important collection of archaeological sites in the country (the park has 737 of them cataloged), it can be found in its caves some of the oldest cave paintings known to men, many with almost 25,000 years, a source of knowledge about how our oldest ancestors expressed their culture. These paintings decorate today a large part of the production of handmade ceramics of the region.