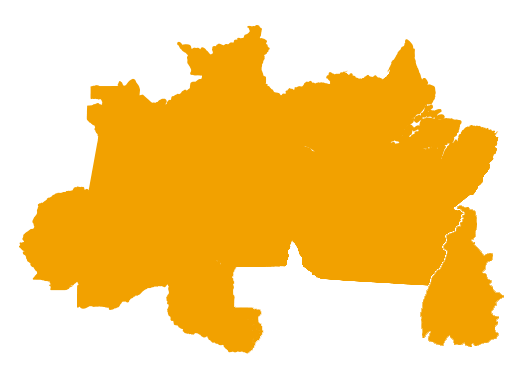 Encompassing the states of Amazonas, Acre, Amapá, Roraima, Rondônia, Pará and Tocantins, the Northern region of Brazil is the largest in the country, comprising a huge area of 3,853,677 km2 (more extensive than the area of most countries of the world), within which is concentrated most of the Brazilian Amazon Forest.

A region with vast areas of isolation (only 4.6 inhab./Km2), its cultural and developmental history was mainly influenced by the richness of local biodiversity (which attracted many explorers over the centuries), the presence of the indians and the difficulties of access created by the dense forest, which still today pose immense problems to transportation and trading of products in communities outside greater urban centers.

The Northern culture, more explicity in its cuisine and in its handicrafts, is predominantly indigenous, as that is the region of Brazil with the largest number of tribes still preserved, and one of the least influenced by black culture. This indigenous presence and its natural relation with the forest are manifested in a great diversity of handcraft works representative of the culture of each tribe, such as, for example, the beads work of the Kaxinawá, the Ticuna basketry from river Solimões and the jewelry made with babassu, jupati and jarina created by the Union of Indigenous Artisan Women (Umai) of the Rio Negro.

However, artisanal production in the North of Brazil is not confined to works created only by indigenous people. In the state of Tocantins – annexed to the North region in 1988 – the presence of the black culture is stronger, mainly in the diverse productions of the Capim Dourado Association, located in the region of Mateiros, where the indian culture is strongly mixed with the quilombola and cabocla cultures.

The vastness of local biodiversity was also used by the white man in works which became iconic of the Amazon, such as the natural latex sandals created by Dr. da Borracha in Nova Esperança, Acre state (the same community where the rubber tapper Chico Mendes, a famous environmental activist who died in 1988, worked), products made from vegetable leather and toys made from buriti fiber in Belém do Pará.

Similar to the indigenous production, these products are created within a productive chain that brings important financial resources to their communities without disrespecting the sustainability of the nature in which they are inserted.