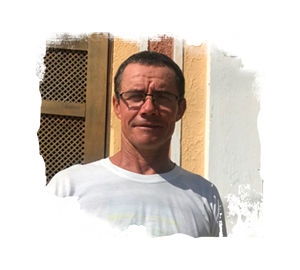 Located 18km from the municipality of Pão de Açúcar (which, like the famous Carioca postcard, also has its statue of Christ the Redeemer), the village of Ilha do Ferro is a small community located in the hinterland of the state of Alagoas. Bordering the imposing São Francisco River, this place of fishermen has become over the last decades one of the best-known craft centers in the Northeast. And it was from this small village that the work of fisherman, farmer and artisan José Petrônio Farias dos Anjos won the world.

Influenced by the work of Fernando Rodrigues (the first prominent local craftsman and an almost unanimous inspiration for all the other artists who work today on Ilha do Ferro), Petrônio, as he is known, decided to follow the paths of wood sculpture in 2002 and, already in 2005, his peculiar style pieces began to receive the first calls for expositions in the capital.

Elongated, twisted bodies, animals with scary red mouths full of sharp teeth and imaginary two-headed creatures are some of his most notorious creations, all carved from dead wood trunks or respecting the shapes of roots created by nature itself. These and other works now have buyers in several Brazilian states, have already been sold to countries such as Italy and Germany, and earned Petrônio the 2014 Artist of the Year award, given by the Committee of the Théo Brandão Museum of Folklore and Anthropology.

Today, these and other pieces are exhibited outdoors at Sítio Estrelo, the artist’s property near Ilha do Ferro where he lives with his wife and two children since 2011.