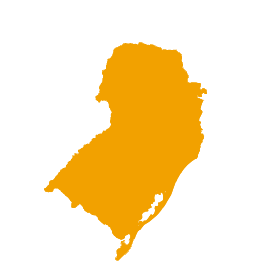 The Southern Region is the smallest of the five main Brazilian regions. However, even extending only to 577,000 Km2, divided between the states of Paraná, Santa Catarina and Rio Grande do Sul, it is today one of the most economically developed areas of the country.

The cultural development of the South is basically linked to the history of the white European colonizer. A region far from the most important commercial centers formed during the first centuries after the discovery of Brazil, such as Bahia, Rio de Janeiro and Minas Gerais, the late colonization of the South eventually brought with it a very small number of black slaves, providing little space for the development of this culture in the region. At the same time, the constant confrontations of the local indigenous tribes with the European and South American immigrants coming to occupy it ended up with the almost total extermination of the Indians of the region. These two characteristics put together have created a point in Brazil where these two cultures are virtually absent, detracting deeply from the rest of the country.

Unlike other regions, the South received large numbers of Italian, Portuguese, Polish, Slavic, and especially German immigrants, who sought better conditions in Brazilian lands than they did in their countries. The massive presence of whites, coupled with the absence of Indian and black traditions, developed a local craftsmanship very similar to that found in Europe. From typical clothing to cooking, to woodwork, weaving, tapestry and ceramics, all the common themes and patterns of southern craft carry that strong influence.