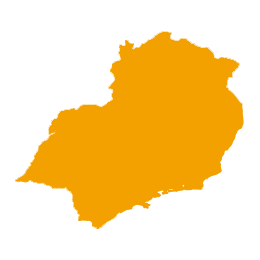 Formed by the states of São Paulo, Minas Gerais, Espírito Santo and Rio de Janeiro, inhabited by 85 million people and currently representing more than 50% of the country’s GDP, the Southeast region is paradoxically one of the smallest regions in Brazil (only four states distributed in 924,620 km²).

Point of entry for Portuguese settlers more to the south of the country, the traditions of Southeast handicrafts are also, as in the North and Northeast, strongly linked to the mixture of the knowledge brought by the colonizers with the influences of the local indigenous culture. However, the two factors that most influenced the creation of an individual character for this production, mainly representated by Minas Gerais, were the discovery of gold and, with it, the arrival of workers brought by the Portuguese crown.

Largest handicraft production center in the Southeast, the position occupied by Minas Gerais did not come by chance. It was on its lands that some of the largest Brazilian gold deposits were discovered in the eighteenth century, attracting thousands of explorers and, with them, hundreds of artisans, many sent from Portugal by the Portuguese crown itself, ready to work supplying the local demand for products and services. Ceramists, cleavers and, above all, hand loom workers, brought with them a technical knowledge learned in Europe, making Minas a center for the diffusion of craft techniques that centuries later would become inseparable from its culture.

The state of Minas Gerais is the region of Brazil where the use of the manual loom is the oldest and also the most preserved, dating back to the arrival of the royal family, who brought with them craftsmen who made covers and bedspreads for the court. Largest traditional weaving region in the state, it is in the cities of Resende Costa, Muzambinho, Carmo do Rio Claro and Campanha that the use of the pedal loom is passed from generation to generation and in which rugs, bedspreads and towels are created with colorful and original design, while in Prados (mainly in the district of Bichinho), the work with fabric was developed into the famous fuxico (decorative designs on towels, bedspreads and cushion covers made with small fabric bags, forming flowers).

Many other artisanal productions have gained a status of typically from Minas, such as the decorative works in soapstone of the district of Santa Rita, near Ouro Preto, and the various forms of the Divine (catholic religious image of a white dove representing the divine holy spirit) made in wood. However, together with the work on loom, that which represents not only a cultural wealth of the region, but also the main source of income for many families, is the pottery production of the Jequitinhonha Valley.

Located in the north of the state of Minas Gerais, it is in this very poor region that work with clay, made mainly by women, gains form as moringas, vases and even dolls, whose colors and designs are the result of the mixture of clay of different shades. Within this production, special attention is given to the artists Dona Isabel, well-known master of this craft, and Anísia, whose water filters in the format of people are very famous today.

Unlike Minas Gerais, the states of São Paulo, Rio de Janeiro and Espírito Santo incorporated little of that influence into their culture, functioning more as points of passage to the interior, or ways to bring gold production to the coast to be sent to Europe. A part of the production of these states is closely linked to the indigenous tradition of the coast, as is the case of the works with gourds in the form of colored balloons made by the Rebuá family in Ubatuba, or the works with clay. Besides the indigenous pottery of the Ribeira Valley, the most significant works with this material are made today by the Paneleiras of Goiabeiras, in Espírito Santo, whose pots to cook moqueca are considered among the best in the country, and by the Figureiras of Taubaté, in São Paulo.

A very old artisanal production center in the interior of the state, the Figureiras of Taubaté work with folkloric symbols of the Paraíba Valley region, such as the Divino, saints, chickens and a diversity of everyday figures and regional imaginary. Its most emblematic figure is the blue peacock, which is today the symbol of São Paulo craftsmanship.